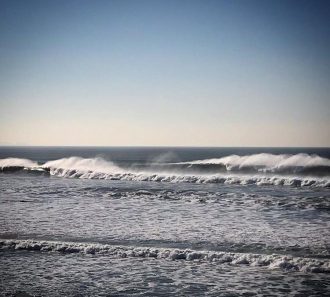 Written by leila smith on November 23, 2019. Posted in Home, Journal

i wonder if any of you saw the programme The Secret Life of Waves on BBC Four recently?

it’s a documentary looking at the science of waves and also exploring the subject from a spiritual and philosophical perspective.

the conclusion of the programme was that as human beings… ‘we are not just LIKE a wave. In some really important and scientific way, we are a wave.’ David Malone.

this rich idea has several threads of relevance for us as yoga practitioners, and suggests that both ocean waves and human beings are energetic forms moving to their energetic conclusions.

the wave is a central idea in Vanda Scaravelli’s teaching. she describes the effect of fully submitting to the force of gravity in practice, and the subsequent rebound or ‘anti force’ which then passes through the body like ‘waves of the sea, with that wide extension over the sand and the rebounding that sucks the water back from the shore.’ vanda scaravelli.

as a starting point for feeling something of this in practice, i have found it helpful to focus on

– letting go deeply into the ground
– following the breath carefully, down into the earth on the exhalation, and paying close attention to the moment when the breath comes back in
– moving loosely throughout the practice avoiding a sense that you are fixing into a position

thanks to Pete for this week’s beautiful photo.